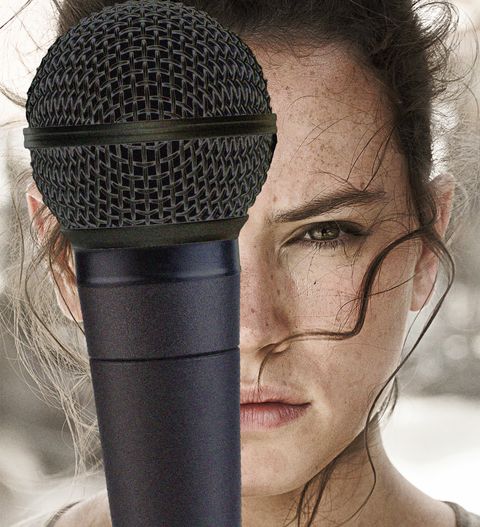 Daisy Ridley has only just become your next favourite movie star, and she now wants to awaken your headphones.

Apparently, the Star Wars actor is also a pretty damn good singer and is about to record a track with a genuine "superstar". That's what director JJ Abrams says, anyway.

"One day on set, she just started singing and had the most beautiful voice I ever heard," he said last night at the US-Ireland Alliance's Oscar Wilde Awards, where Ridley was among this year's honourees.

He added: "On Saturday, this weekend, she is going to record a song with an unnamed person, but let's just say a massive superstar."

She will next appear as one of the many awards presenters at the Oscars on Sunday, before returning to the UK to film Episode VIII.

Daisy has previously shown off her pipes while singing a rendition of 'Baby, It's Cold Outside' with co-star Oscar Isaac during a Twitter chat in December. Watch it in all its galactic glory below:

This content is imported from YouTube. You may be able to find the same content in another format, or you may be able to find more information, at their web site.
This content is created and maintained by a third party, and imported onto this page to help users provide their email addresses. You may be able to find more information about this and similar content at piano.io
Advertisement - Continue Reading Below
More From Music
Blackpink to collaborate with Selena Gomez
Lewis Capaldi and Dave lead 2020 Brits nominations
Advertisement - Continue Reading Below
Blackpink beats BTS to break huge YouTube record
This year's Christmas Number 1 has been revealed
The Vaccines to headline LDN Block Party 2018
Justin Timberlake has written his first book
Bruno Mars flees stage in Glasgow when fire breaks out
Wireless 2018 reveals all-female stage after backlash
Coldplay's greatest hits ranked: Their 10 best singles
My Mental Health: 17 popstars get serious