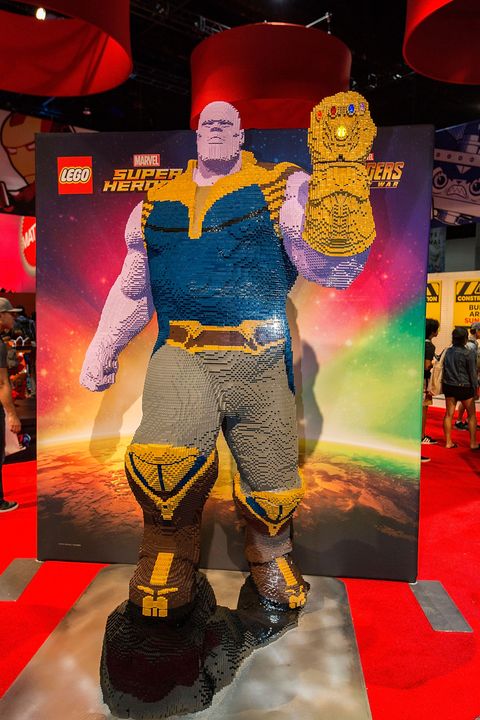 The LEGO universe wasn't kidding when it told us 'Everything is Awesome', as everyone's favourite brick brand has got right into the Black Friday spirit.

Digital Spy has been working hard to give you a rundown of some of Black Friday's best deals, and now it's time to add LEGO to that list, as some much-coveted sets are now on offer.

If you're a Marvel fan – and let's face it, who isn't? – then you'll be happy to hear that the Thanos: Ultimate Battle set has had its price slashed to just £55.99.

Related: LEGO advent calendars are back in time for Christmas

The buildable set comes with a "big Thanos" figure, complete with the Infinity Gauntlet (Infinity Stone attachment points included), Iron-Man, Star-Lord and Gamora figures, and even the Guardians' ship.

Still upset over Infinity War's ending? Now's your chance to write your own.

If Star Wars is more your thing, then you can now grab the X-Wing Starfighter set at a discounted price. Luke Skywalker and Biggs Darklighter pilot figures included, obviously.

As well as a convertible X-Wing ship, the set also comes with two seriously cute R2-D2 and R2-Q2 LEGO droids. What more could you ask for?

At the pricier, but potentially cooler, end of the scale, LEGO is also offering a £50.00 discount on its Joker Manor set, which has been reduced to £199.99 for Black Friday.

The set, which includes the Joker's garish haunted house-style mansion, also comes with a whopping 10 minifigures, including 'disco' versions of some of your favourite DC characters.

Now that we've all erased Suicide Squad from our minds, we reckon its time for a live-action disco-themed Batman spin-off. Don't you?

This content is created and maintained by a third party, and imported onto this page to help users provide their email addresses. You may be able to find more information about this and similar content at piano.io
Advertisement - Continue Reading Below
More From Black Friday
Animal Crossing T-shirts on sale for 40% off
FIFA 21 is on sale again for Cyber Monday
Advertisement - Continue Reading Below
Fitbit's new Versa 3 has price cut at Amazon
Save on this Apple Watch SE in the Amazon sale
Cyber Monday 2021 UK – All the best deals
Samsung's A21 is now 20% off for Cyber Monday
This big LG TV is discounted during Cyber Monday
The best Cyber Monday 4K TV deals 2020
The best electric toothbrush deals
Samsung Galaxy Buds are 30% off for Cyber Monday